You are here! » Home » Explore the area » Paths » Thematic itineraries » On the trail of memory, Jewish places in the Province of Parma 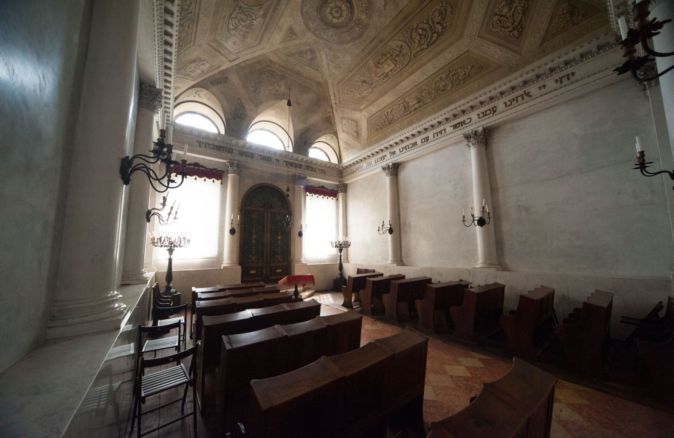 Itinerary: Parma, Fontanellato, Soragna, Busseto
How: by car
When: all year long
Duration: a weekend

An itinerary to track the Shoah through the memories of Jewish presence in the province of Parma.
Not many people know that in the coloured shadows of the Diana e Atteone room by Parmigianino in Fontanellato, there are frescoes in an environment created on the model of Jewish celebrations.
Parmigianino must have taken inspiration from the Jewish way of building temporary huts outside the residences, to spend the night celebrating the Feast of Tabernacles or sukkoth, that in Yiddish means huts, lasting eight days.
When the painter paints the room for Earl Galeazzo Sanvitale and his wife Paola Gonzaga, between 1523 and the first half of 1524, Fontanellato, with San Secondo and Poviglio, that was Parma territory back then, was indicated as one of the most welcoming places for Jewish, due to the Lords’ policy of not caring about God’s hostility.

In the 16th century Jewish people are present both in town and in the feuds of the territory around: the Pallavicino are carrying on a policy of logging and repopulation by creating small capital cities, as Busseto, Cortemaggiore and Monticelli d’Ongina, therefore Jewish people were welcome to run loan banks, a forbidden activity for christians, and that was essential to activate the local economy.
A Jewish community was also present in Parma and had their cemetery at the Church of Santa Maria Maddalena, near the modern borgo della Posta.

In the year 1488 father Bernardino da Feltre, during his constant anti Jewish preaching, created in Parma the Monte di Pietà, whose successor is the former Bank del Monte, allowing christians to give loans. Thereby a decline started for the local Jewish, who had to leave the city. Later they do it for good when Ottavio Farnese, pressed by Pope Paolo IV who created ghettos and other restrictions, chose to alienate them from the Duchies in favor of other specific areas of residence.

For the area around Parma: Colorno, San Secondo, Sissa, Roccabianca, Soragna, Borgo San Donnino, Busseto. In the year 1803, when Moreau de Saint-Mèry applied in Parma the laws of the French revolution, that acknowledged equality of citizens and were against discriminations, Jewish got back in town and they were about seven  hundred.
In 1817 Maria Luigia ordered the project of the Villetta cemetery, where thay had their own area for burial, still existing. Among the others, there is the grave of Eugenio Ravà, one of Garibaldi’s Thousands, while at the Soragna City hall a headstone remembers Tobia Levi, who died in 1859 during the Second war of Indipendence.

In 1866 opened the Synagogue of vicolo Cervi 4 in Parma, designed by architect Pancrazio Soncini, which is still home of the community and of the archive.
From 1845 to 1848 in Parma was published the first Jewish newspaper in Italian, the “Rivista israelitica. Giornale di morale, culto, letteratura e varietà”.
An extraordinary treasure of Jewish culture is the Palatina library in Parma, second in the world only to the Bodleian library of Oxford, while all the documents about the Jewish community are preserved in the National archive of Parma, included a precious collection of medieval Holy texts, in the Municipal archive and the one of the Historical institute of Resistence and contemporary years of vicolo delle Asse 5, that houses the documents about Shoah.

In the Montanara district, in via Bramante, there is the park entitled to the Fano and Della Pergola brothers to remember the six kids deported to Aushwitz with a headstand dedicated to the young victims.
Soragna is the place with more memories, witht he Synagogue of via Cavour 3, built in 1855, the Jewish museum Fausto Levi, the room of synagogues, the room of Shoah and Hurbinek: the room for schools in via Garibaldi 52. In Soragna there is also the Jewish cemetery, in the countryside, 3 km
away, that can be reached through strada Argini and via degli Israeliti.
Jewish evidences are also in Busseto, in the cemetery, in the works of Gioacchino Levi (1818 – 1903) preserved in many places, among which the Monte di Pietà library.