A brief history of the city 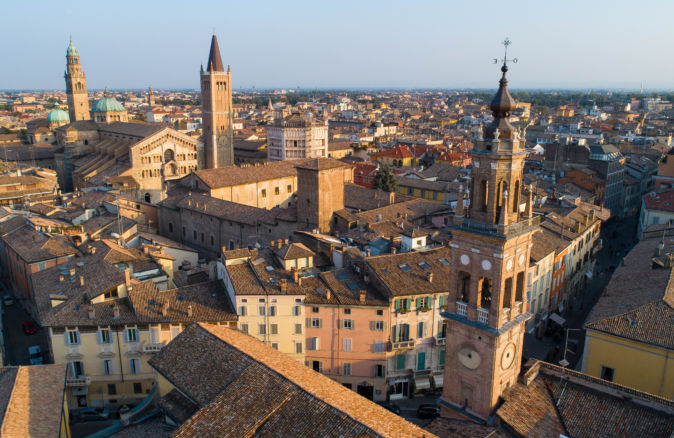 The origins of the city of Parma are extremely old:  evidence of man dating back to the Lower Paleolithic time period was discovered in the hills of Traversetolo and in the montanto basin of the Taro river.  Numerous terremare–stemming from terra mara or terra marna, mounds of blackish soil, formed by settlements enclosed by a bank and stream- were recovered in nearby provinces and are instead a testimony to the Bronze Age.

Founded in 183 A.D. by the Romans, Parma immediately became an important reference point for all of the surrounding plains: the construction of Via Emilia (187 A.D.) promoted a profound and rapid development of agriculture and of ovine breeding in all of the territories.
In 569 the city was conquered by the Longobardi family and became home of a Duchy.  A new system of communication began to override the Roman order.  The Parmense segment of Via Francigena was born.  Castles and hospices were quickly springing up to insure that pilgrims and travelers were met with assistance and hospitality.

From the IX century, cloistered centers, predominantly Benedictine, encouraged a reclamation of the territory, and allowed for the recolonization and the restoration of agricultural land. The bishops progressively assumed temporal power and Parma provided two antipopes – Honorius II and Clement III – to the conflict between religious and political power on the ordinations.
The constitution of the Municipality, around the year 1140, signaled the beginning of the rebirth of the city after a period of Medieval turmoil.

Internal conflicts, between Papist families (Sanvitale, Rossi, Lupi) and Ghibellines culminated in the battle of 12480 and the defeat of the Emperor Federico II.  Parma was later conquered by the Viscounts and dominated by the Sforza family (1440-1500), which imposed its rule by means of important noble families of Pallavicino, Rossi, Sanvitale, and Da Correggio.

From 1500-1521 the city was controlled by the French, then by the Church.  In 1545 Pope Paul III, wanting to create a buffer state between the state of the Church and the Spanish power in Lombardy gave the Duchy  to his illegitimate son PierLuigi Farnese.  Thanks to their financial means and power, the Farnese family ruled for two centuries.  During this time the city became an great capital, rich with monuments and works of art.
With the extinction of the Farnese family (1731), the Duchy was passed to Carlo of Spain, son of Elisabeth Farnese and Philip V and following the Peace of Aachen (1748), he was able to add a good portion of the lower regions to his territory.

Parma was then passed from Spanish control to French: the political reformer of this dynasty, supporter of the enlightenment culture, allowed the duchy to resume.
After 1759 the decisive action of Prime Minister Guillaume du Tillot imposed a modern state, founded on civil organization and industrial economy.
The Congress of Vienna of 1815 assigned the Duchy to Marie Louise of Austria, the second wife of Napoleon Bonapart, who governed from 1816-1847, starting an absolute state sovereignty comprised completely of non-native ministers.
The prestige of the beloved Duchess was such that the Duchy was not affected by the first Risorgimento movements. In 1847, with the death of Marie Louise, the Duchy returned to the Bourbon family.  The plebiscite of 1860 declared the annexation of the former Duchy of Parma to Piedmont and then into the unified Kingdom of Italy.

With the construction of a unitary state, Parma was greatly affected by the demotion from head of state to a simple capital of a province, and experienced grave social and economic crises.
At the beginning of the 1900s Parma saw the diffusion of unions and socialist organizations and strongly opposed to the Fascist regime that was spreading throughout Italy.  The struggle with Fascism culminated in its most dramatic moment in August 1922, when Italo Balbo attempted to enter the popular neighborhood Oltretorrente.  The citizens organized themselves and were able to ward off the soldiers with their famous barricades.

During the Second World War, the enormous damages caused by bombings and numerous battles prompted the formation of a zone controlled by partisans until the liberation on 25 April 1945, especially in the valleys of the Taro and the Ceno rivers.  The reconstruction and the economic development after the war helped Parma regain its original splendor.  The city started to prove itself in the food industry and resumed its position in the cultural and artistic world, also thanks to the relaunching of its heritage and traditions.

Since 2003 Parma is the headquarter of the European Food Security Authority (EFSA).
In december 2015 it has been designated Unesco Creative City of Gastronomy.
In 2017 Parma celebrates 2200 years since its foundation.