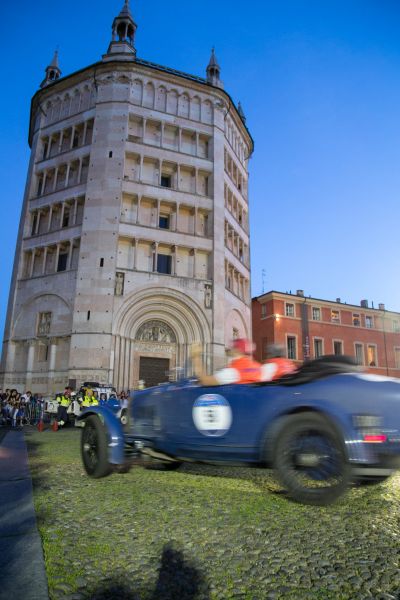 The event of historic cars will unfold in a path being defined through the streets of the city. 1000 Miglia 2020: Parma once again on the path of the most beautiful race in the world.

The 1000 Miglia 2020, the thirty-eighth edition of the historical race from 1927 to 1957, will start from Brescia next October. This year, 400 cars will be at the starting points of the most important regularity race in the world for historic cars.

from Brescia, the parade of historic cars will cross the suggestive municipalities of Lago di Garda, Desenzano and Sirmione, and will gradually pass from Villafranca di Verona, Mantova, Ferrara and Ravenna to conclude the first day of competition in Cervia – Milano Marittima.

From Cesenatico, the next day we will descend to Urbino, Fabriano, Macerata, Fermo and Ascoli Piceno, and then enter in the areas with the signs of the 2016 earthquake, passing through Macerata, Fermo, Ascoli Piceno and Amatrice. From Rieti, vintage cars will arrive in Rome where, after the usual parade through the streets of the Eternal City, they will conclude the second stage on the always exciting catwalk in via Veneto.

On the third day, early in the morning for the third and long stage, the cars will touch Ronciglione, Radicofani, Viterbo and Castiglione d’Orcia in succession and then return to stop in the magnificent Piazza Il Campo di Siena.

Going up from Lucca, the cars will leave Tuscany crossing the Passo della Cisa, and then make a stop in Parma, the Italian capital city of Culture 2020, which will welcome the crews for the last night of the race.

The fourth and final day will see the passage from Salsomaggiore Terme, from the village of Castell’Arquato (Piacenza), from Cernusco sul Naviglio, the town in the province of Milan recently named European City of Sport 2020 and then from Bergamo, before concluding the competition on the arrival platform of Viale Venezia in Brescia, where it all began 93 years earlier, in 1927, with the first 1000 Miglia Cup.