You are here! » Home » Exhibitions » Modigliani. Works from the Museum of Grenoble

Modigliani. Works from the Museum of Grenoble 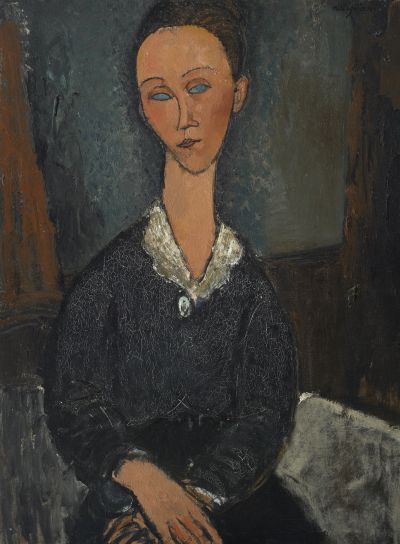 On Saturdays, Sundays and holidays, the ticket also includes a free visit to the secret closet of the Villa. Information and group reservations: tel. 0521 848327/848148 info@magnanirocca.it www.magnanirocca.it On Saturdays at 4.30 pm and on Sundays and holidays at 11.30am, 4pm, 5pm, visit to the focus exhibition 'Modigliani' and the permanent collections of the Foundation with a specialized guide; you can book at segreteria@magnanirocca.it, or go to the museum entrance if seats are available; cost € 17.00 (entrance and guide).

A hundred years have just passed since the death of Amedeo Modigliani who, just thirty-five, died in Paris with his mind in delirium, after a short but burning and artistically accomplished life.

The exhibition, thanks to the collaboration with the Musée de Grenoble, of six works by Modigliani, between painting and drawing, allows you to analyze the relationship between graphics and painting and to grasp the main cultural references in his work as a portraitist.

The painting Femme au col blanc, oil on canvas from 1917, depicting Lunia Czechowska, wife of the childhood friend of Léopold Zborowski, art dealer and patron of Modigliani, and five pencil portraits of characters from the French capital of the ten years, where he was at the center of the art scene, at the time at the international avant-garde. In Modigliani’s pictorial poetics (Livorno 1884 – Paris 1920) the portrait represents the only possible vehicle of expression of the artist’s creative fury and the vital instrument of externalization of the deeply human anxiety of intertwining a relational exchange with others beings.

Starting from a deep fascination for the stylistic essentiality of the fourteenth-century and fifteenth-century Sienese tradition, for the plastic qualities of sculpture and for the stylization of the graphic stroke, Modigliani elaborates an absolutely original conception of the portrait, also taking into account the teaching of of African masks. To underline these influences, important examples of Sienese and Cezannian painting are combined in the exhibition with the works of Modigliani.

The masterpieces of French and Italian art of the period in which he lived and worked, belonging to the collections of the Magnani-Rocca Foundation (in the French context, in addition to Cézanne, also Renoir, Monet, Matisse, and Braque; in the Italian context, Severini and Morandi ), offer the public a broad view of the art scene of the time.

Restless, always poised between genius and recklessness, a modern dandy and a refined architect of his own tragic destiny, a perfect stereotype of the cursed artist, Modigliani, as well as a great painter, was an excellent draftsman, succeeding, with a volumetric stroke and at the same time two-dimensional, to capture the sensitivity and psychology of the portrayed; those who modeled him said that being portrayed by him was like “having your soul undressed”.

The most characteristic and fascinating trait of Modigliani’s work lies precisely in his introspective talent, which allowed him to express the most intimate qualities of the person, transforming every single portrait into a sort of inner mirror. Far more famous than the male ones, the female portraits are the greatest examples of Modigliani’s artistic sensibility; the delicate features, the tapered and elegant necks, have become identifiers of the painter’s own art and the Femme au col blanc is a splendid example of this. While using a purely modern language, he never forgets the Italian tradition; the female ideal with the long neck had in fact been longed for and painted by other great artists of the past, one of them, Parmigianino, with his long-necked Madonna painted in Parma between 1534 and 1540.