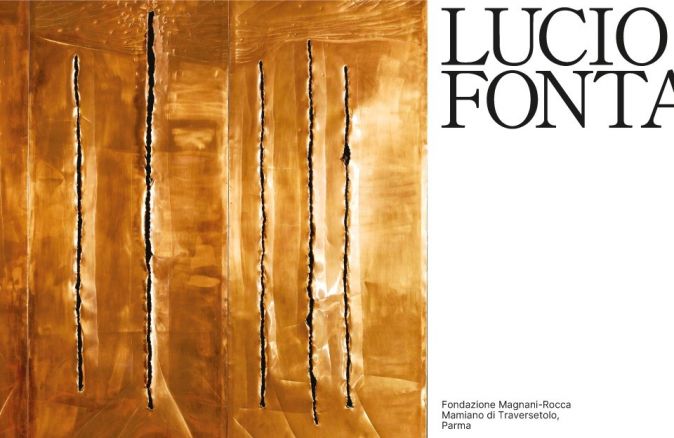 The Lucio Fontana. Self-portrait exhibition originates from the relationship between the artist, founder of Spatialism and one of the greatest masters of the 20th century, and the art historian Carla Lonzi, a pupil of the celebrated academic Roberto Longhi; Lonzi revolutionised the idea of militant art criticism with her book of interviews, Self-portrait. Accardi, Alviani, Castellani, Consagra, Fabro, Fontana, Kounellis, Nigro, Paolini, Pascali, Rotella, Scarpitta, Turcato, and Twombly, edited by De Donato, Bari, in 1969.
Including about 50 works, the exhibition is held at the Villa dei Capolavori, headquarters of the Fondazione Magnani-Rocca in Mamiano di Traversetolo, near Parma, from 12 March to 3 July 2022, and is curated by Walter Guadagnini, Gaspare Luigi Marcone, and Stefano Roffi.

The narrative of the exhibition follows the conversation between Fontana and Lonzi, contributing to set up an anthological, but not dogmatic itinerary, with works that explore the salient and peculiar moments of Fontana’s research; it’s a sort of journey in the thought and practice of an artist who believed that art should be experienced through a new dimension, within which new technologies and materials also entered. Works from various periods are showcased, from the 1930s

sculptures to the 1940s-1960s “Spatial Concepts” (“Holes” and “Slashes”), as well as the bronze “Little Theatres” and “Natures”; spectacular are the huge New York 10, 1962, copper panels with lacerations and graffiti, in dialogue with light to evoke the shining modernity of the metropolis, and the very powerful La fine di Dio (The End of God), 1963, a large work made of oil, slashes, holes, graffiti, and sequins on canvas, emblematic of the artist’s spatial and religious conception. The itinerary ends with works by Enrico Baj, Alberto Burri, Enrico Castellani, Luciano Fabro, Piero Manzoni, Giulio Paolini, and Paolo Scheggi, younger artists that the master followed and promoted, coming from Fontana’s personal collection. The photography series by Ugo Mulas, with Fontana as the subject, are particularly suggestive; two other works by the great photographer are also on display: one of them is a photoshoot documenting the entire process, from the first “hole” to the finished work, of a Fontana’s piece of art, making it a unique case in both the photographer’s and the artist’s history.

A peculiar feature of the project is having recovered the audio file of the original and integral conversation, in which one can hear the very voice of Fontana talking about his work, his life as an artist, his activity as a collector but also about experiences and daily events (in the 1969 volume, Lonzi published only part of the long interview). Fontana’s words are used both as a sound installation and a narrative thread throughout the Self-portrait exhibition’s itinerary.

The exhibition is supported by the Lucio Fontana Foundation in Milan, which loaned an important group of works. Other pieces of great importance were lent by the Mart (Museum of Modern and Contemporary Art of Trento and Rovereto), the Museo Novecento in Florence, the Study Centre and Communication Archive (University of Parma), the Intesa Sanpaolo Collection, the Artistic Heritage of the Unipol Group, the Barilla Collection of Modern Art, the Ugo Mulas Archive, the Cariparma Foundation Library, Donazione Corrado Mingardi, and other prestigious Archives and private collections.

The catalogue (Silvana Editoriale) is edited by the curators of the exhibition, Walter Guadagnini (former curator of two prestigious exhibitions at the Villa dei Capolavori), Gaspare Luigi Marcone (historian and curator of numerous projects on 20th century Italian artists), Stefano Roffi (scientific director of the Fondazione Magnani-Rocca). Along with the curators’ contributions, it includes essays by Paolo Campiglio, Mauro Carrera, Lara Conte, and Maria Villa, as well as pictures of all the works on display.