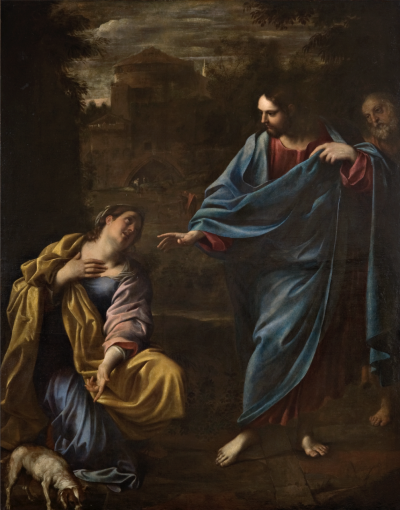 The exhibition, that will open on Saturday 7 May, is promoted by the Department of Culture of the Municipality of Parma in collaboration with the National Academy of Parma and the Camaldolese Congregation of the Order of San Benedetto and curated by Alessandro Malinverni, curator of the Museum Gazzola di Piacenza and member of the Presidency Council of the Academy, and by father Ubaldo Cortoni, archivist and librarian of the Sacred Hermitage of Camaldoli.

The exhibition aims to reflect on the complex, and often not easy, relationship between the master of Bolognese Classicism and the last great prelate of the dynasty, especially in relation to the cardinal’s commission for his Roman residences and for the Camaldolese congregation of the Order of St. Benedict. The painting “Christ in glory with Saints and Odoardo Farnese” (Florence, Galleria Palatina), donated by Cardinal Odoardo Farnese to the Maddalena Chapel, erected and decorated at the expense of the Farnese in the Camaldolese hermitage, will be exhibited for the first time together and some artefacts owned by the congregation (engravings, books, coins and the famous pectoral cross called “Parma” in gold, enamels and rubies), as well as the “San Romualdo” by Andrea Sacchi (private collection). The various acts of liberality of Odoardo towards the Camaldolese are linked to the shrewd Farnese policy of alliance with the major regular congregations and in particular to the historical link of the family with the Hermitage.

The close dialogue between these works and the masterpiece of the Pinacoteca Stuard, created by Carracci for the chapel of the Palazzo Farnese in Rome, will be accompanied by similar works by author, subject and client: “The Portrait of Cardinal Odoardo Farnese against the background of Trastevere and Gianicolo ”by Domenichino and“ The portrait of Cardinal Alessandro Farnese ”by Luca Longhi, from a private collection, documented in the Palazzo del Giardino in Parma in the second half of the seventeenth century.

The exhibition, set up in a room of the Stuard Art Gallery, closes with a film dedicated to the history of the ancient Camaldolese institution.

The exhibition, with free admission, will be accompanied by a series of collateral events including guided tours, lectures, performed and costumed visits and an agile catalog with contributions from Malinverni, Cortoni and other scholars.